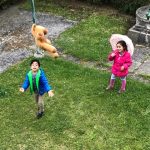 After a long, utterly exhausting, and life-threatening escape from their home in Syria, a family with five children finally reached save grounds in Austria. The family had lost their house and all of their wealth in the war. Together with other refugees the family was initially received in an emergency shelter in a village close to Eisenstadt. The aid organisation Burgenland covered their care. Furthermore, several of the villagers offered voluntary services and care, such as educational help and language courses. The essentials were quickly organized for the families. The network of helpers, which was established at that time is still very active today. Since then, the family was officially accepted by the town and a house was rented to them. This way it is now possible for the family to build new roots in safety and start to work on processing the trauma of their escape.

When Anna and Gertraud got to know the children at a birthday party, they were moved by their story and decided straight away to offer the support of Moving Child. Since then, Moving Child has supported the children continuously by enabling special language tutoring and training. Since 2016, Moving Child has been helping the small family by financing afternoon care, helping them find apprenticeships, and various small educational offers. In the meantime, the family has settled in and developed in such a way that no further support is necessary.

It is very impressive to see how, within a few years, this family has proactively and successfully found their way into a new every day and professional life. Both parents are now working. While the father works in a bakery, the mother is employed as a cleaner in the nearby hospital. The independence that comes with working gives both of them a lot of pleasure and allows them to make many new and supporting contacts. The oldest son in the family has already completed his apprenticeship as a car mechanic and continues to work in his training company with great pleasure. The second oldest son has also completed his training as a dental technician and is now moving to Bregenz to continue working as a dental technician, which he really enjoys. The middle daughter successfully passed the Abitur in the summer of 2021! Subsequently, she started studying chemistry at the University of Graz. But since her deepest wish is to become a doctor one day, she will apply for a place in a medicine program in the coming year. Her younger sister is still in middle school but would like to attend vocational school soon and train as a kindergarten teacher. The youngest son of the family is now also in the second grade of high school but would prefer only to play soccer all the time. And he has great talent! Who knows, maybe he’ll go to a soccer academy after graduating from high school? One thing is certain, the family has gained a foothold! The parents are happy to continue living in the village with their two youngest children and are often visited by the grown-ups. We are touched and moved to have been part of this development in recent years. We wish the family good luck and the children much joy in shaping their lives independently.