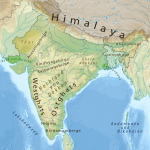 In April and May 2021, the numbers of new corona cases in India have been devastating. The number of cases increased rapidly and within a week more than 1.5 million new infections were reported. In only one week in May, new infections in India accounted for nearly half of all cases recorded worldwide. It is assumed, however, that there was a significantly larger number of unreported cases of infections, which would be many times higher than the reported cases. This is especially assumed as the virus spread quickly from the cities to the countryside, where testing was often not possible.

The health system in India was not able to handle such numbers and was on the verge of collapse. One no longer knew how to proceed with the dead. India was and still is lacking all the essentials: oxygen, vaccines, medicines, and hospital places. Children are particularly affected. Their parents and relatives are dying or sick. Contact persons are afraid to visit them. They are helpless. Supplying the children with food, hygiene products, medication, and psychological and social help is often not possible.

Moving Child campaigns for India and donates the exceptional sum of € 300,000 for Corona emergency aid in India. We support the work of Save the Children Deutschland e.V., who are working on site. We hope that with enough solidary global support the situation in India and thus in the world will quickly take a turn for the better.