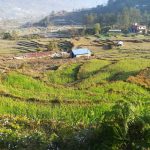 Hands With Hands is an association of international and Nepalese friends who work on a voluntary basis on the vision of solidarity with one another. They support Nepalese people and organizations and initiate and finance projects that promote empowerment of the local people and communities. The self-sustaining Annapurna children’s home in Pokhara is the association’s main project at the moment. Read more about the idea and orgins of the project in our blog post from last year.

The situation in Nepal and in the Annapurna children’s home continues to be difficult in the persistent corona situation. The children at the home all caught the corona virus, but thankfully also all recovered from it. In the end Sharada, who had cared for weeks for the sick children, fell ill as well. It was a long infection and she recovered only slowly over 6 weeks. Mercifully, the children and Sharada are now back on their feet. The vaccine rollout in Nepal is very slow. This is partly due to widespread misinformation, which generates scepticism in the population, and also due to the low availability as Nepal received only small supply of surplus vaccine units from America and China via the limited COVAX system.

For months all education has been online. This has been a huge challenge not only for the 40 children at the home, who have to try to continue to keep their studies up under such difficult circumstances, but also for the teachers. Hands with hands has offered teacher training to help the teachers to understand and use the available online tools and forums. While this works with a lot of discipline and effort in the Annapurna children’s home, especially the very poor children in Nepal were not able to attend online classes for months. This lack of education will have dramatic long-term effects for the population. Girls in particular are unlikely to return to school, once it would be possible again. Hands with Hands is planning to generate incentives for the children, especially for girls, to go back to school when the schools reopen (which is not likely to be before April 2022). Small scholarships, school uniforms, materials, and books could be offered to motivate a return to school.

Despite the month-long lock-down the construction on the new earthquake-safe Annapurna children’s home is progressing and the work is now already working on the roof of the second story. However, the 2nd Delta wave is starting to hit Nepal and it is not possible to predict how the expected new lock-down will affect the construction. Hands with Hands hopes that the construction work will be able to continue throughout the lock-down, but that depends on if the building materials can be acquired before the lock-down.

The situation in Nepal is further aggravated by an extremely strong monsoon this year. Luckily the children’s home was not affected too badly by the monsoon, but a school (in the East of Nepal, Sindhupalchock district) was hit very hard by the flooding. Hands with Hands supports this school as well and it was sad to see that a river, which was re-routed by the drastic increase in volume, took out part of the school (6 classrooms!). The courageous efforts of the locals, who build a wall to re-route the water (while standing in the river themselves!), saved the rest of the school. Reconstruction of the school will need efforts and resources in the next couple of months and the monsoon is still scheduled to continue for a couple of weeks.

Despite the dramatic situation, the mood of the people is surprisingly undaunted. Nepal has been hit with such disastrous events, especially in the past 10 years, that the people adopted an accepting good attitude and in the face of catastrophe maintain an optimistic view of the future. And indeed, at least the harvest in the Annapurna children’s home was good this year. The food for the children is secured and 5 new children were taken in care this year. Excess food was given to the poorest in the community. Food care packages were prepared to help especially mothers with young children.

Hands with hands needs donations in order to continue their important and incredible work in Nepal. The donations are needed mainly to acquire building materials for the new children’s home, but also to rebuild the destroyed school and continue to support extremely poor families with food.